Excel 2013 makes it really easy to share workbooks using OneDrive, which we discussed in Earlier Sections. In order to share any workbook in Excel 2013, it must first be saved to your OneDrive (See How to Save onto OneDrive Section).

Just Go Through Available Options & Share to the people or Social Networks you want to. 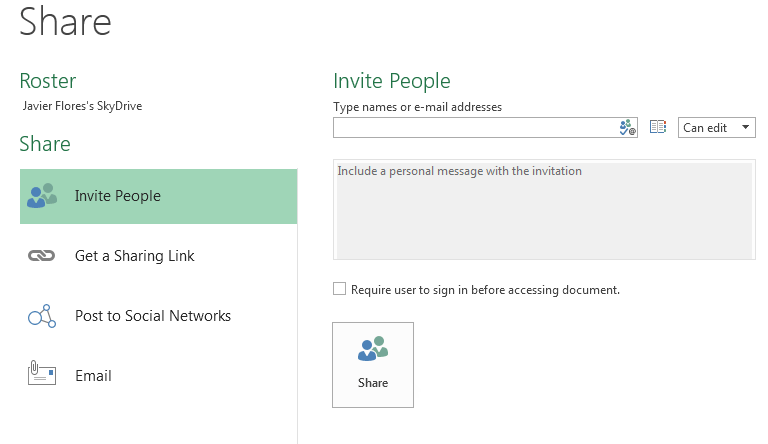 OneDrive is a compelling & Highly Admired product from Microsoft Corporation. With an ample 10  GB of free storage, a slick & stylish interface with the  ability to download files from any internet connected computer, OneDrive is far better than Dropbox.

Getting Started with Microsoft OneDrive

Microsoft’s OneDrive works on almost every version of windows, including Windows 8, Windows 7 and of course Windows Vista but not for Windows XP users because Microsoft Corporation wants you to upgrade to newer versions. OneDrive also runs on Apple’s OS X, Windows Phone, Apple iOS & Android.

Interestingly, Windows 8 comes integrated with OneDrive support in its Metro.

Here’s How to Install OneDrive on Your Computer.

Go to https://apps.live.com/Onedrive from your Browser. After you launch the OneDrive installer, it installs the app without any Hassel & additional Commands.

Once you’ve installed OneDrive on you computer, Log in with your Windows Live ID (Windows Id or Hotmail/Live Id) . Also Outlook Id as well.

Now You’ll have a single OneDrive folder on your Computer, which is located at this directory ” C:\Users\NAME\OneDrive by default.”

You can also enable OneDrive’s “fetch” application to fetch files on your Computer or  from your other connected devices like Mobile, Tablet etc..

You can change OneDrive’s settings from the system tray icon.

Do you Know? The badges on the files or Folders  indicate your OneDrive’s progress in synchronizing them with the Cloud. Green check mark indicates the file has been successfully Uploaded & the icon with blue arrows indicates the OneDrive is still syncing the file.

You can also access your saved & synced files from OneDrive.com, if you’re not using any connected device. From this web interface or website, you may download, delete, move, copy, or share files & view your connected Devices & computers.